Over the years since Good Energy Solutions has been in business we have run across numerous solar pv and wind power systems that simply do not perform as well as their owners were told they would.

There are numerous reasons why a solar pv system may not perform. Perhaps the system is in the shade, it was not designed properly, or it was installed incorrectly. Some owners may not even know their solar pv system’s performance because it is not monitored.

Recently, a manufacturing operation came to us because of their substantial electricity bills. They questioned how much the 90 panels on their roof (21.6kW system) were really saving them. They looked at their bill and misunderstood the value of the very small to non-existent net metering credit they were seeing and decided there was something wrong with their system. They suspected trees perhaps were shading the panels too much.

Their original assessment of their bill was incorrect, but it turned out that the system was underproducing and it wasn’t only because of the trees. We explained their bill and looked into their monitoring system. We determined that not only was the system underproducing, but that it was because it was installed incorrectly.

The owner had also consulted with an engineer and another solar company at some point to fix the incorrect installation and the solution they developed and implemented was also incorrect. The team at Good Energy Solutions was able to solve the problem and fix the system. It is now up and running correctly and the customer is pleased.

“I was having issues with a 90-panel solar system on one of my commercial properties that was under producing because 1/3 of the panels were not generating any power.  Good Energy Solutions quickly diagnosed the problem, provided me with an affordable quote and fixed the problem within 10 days.  I am very impressed with their solar expertise and integrity and would highly recommend Good Energy Solutions.” – Jordon Ringel, DDEquity

So what was the problem? For all you technical types:

The original solar pv system was designed using buck boost transformers with the intention of transforming the 240V per phase delta service to a 208V per phase wye service. This design did not achieve the intended goal and thus did not perform correctly, as Enphase inverters are only compatible with a 208/120V wye distribution.

The buck boost transformers were then removed from the system by another electrician and replaced with an alternative design. The three-phase strings were spliced together, resulting in a two-wire configuration that was then tied to the three-phase system through only one of the phases. Although the system was operational, this configuration was also incorrect and therefore causing the system to underperform by 33% of what it should.

The existing service was a 240 delta with a center-tapped neutral. GES recommended that a new 20kVa delta 240V three-phase primary-to-wye 208/120V three-phase secondary transformer be installed. This provided the wye configuration needed to render the system compatible with the Enphase inverters. Additionally, three 70-amp fuses were installed on the existing solar disconnect, as well as new solar load center breakers in order to properly connect the two combined strings from the pv array to the 30kVa transformer.

Examples like the above are unfortunately not uncommon in the solar and industry. Good Energy Solutions was once contacted by a Principal of a solar installation company because their battery based solar pv system was installed incorrectly by their company. The engineering staff at Good Energy Solutions was able to remedy the problem and get the system back to working order.

There have also been a few do-it yourself home owners that have gotten themselves in too deep. We have been able to fix the wiring and in the long-run, the homeowners realized they spent more time and money fixing the solar pv system than would have been spent if the system had been professionally installed in the first place. 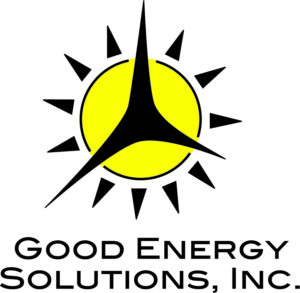 Our mission at Good Energy Solutions is to provide our customers with honest, real solutions to reduce their fossil fuel consumption and lower their long term energy costs. “Energy with Integrity” isn’t just a company slogan, it’s how we do business.

Founded in 2007 by Kevin and Shana Good, Good Energy Solutions has earned a reputation for our expert reliable service, long workmanship warranties, and quality commercial and residential solar installations.

If you would like to know more about solar power for your home or business, contact us here.